I love three-day weekends. They give you time to think!

I've dusted off Frances's tracing game and finally fixed a niggling bug that had been bothering me. I'd taken a shortcut on centering the images on the screen by putting the image in a view that was embedded within a larger view. That solution had been playing passably, but it had annoying side-effects in Jellybean:
I therefore ditched the two-view solution and did the math internally to set up the images in the center of the view (there's a convenient Canvas.translate method to do the offsetting for me in terms of drawing, and I do the translation of touch events from view coordinates to image coordinates myself).

There's a lesson in this. Sometimes, an operating system changes and it becomes clear that the OS's developers don't have your use case in mind. When that happens, there are a couple of ways you can respond. But when you're working on a hobby project and don't have the clout to steer the OS project itself, it's often easier to adapt to the changes than it is to push back. Don't be afraid to replace someone else's functionality with your own code. But when you can contribute, do; the svg-android renderer instance that I use seems to have issue with some flavors of transform logic, and if I don't find that this has been fixed in later versions, I plan to patch it and submit the changes back to the maintainers.

The new version of Frances's Tracing Game should be available in the app store some time today.

On a related note, there's one more bug to fix... I'm going to have to figure out what to do about the title. Frances herself is growing out of this game, but her younger sister was born this week. Welcome to the world, Cecilia!
Posted by Mark T. Tomczak at 6:11 AM No comments:

Return of the Arduino part 3: mount the transmitter LED and load in the control code.

With the IR sensor and the status indicator LEDs in place, the only remaining steps are to wire up the IR transmitter and load the control software. Relative to everything else, this is the easy part. :)

My IR LED of choice is a 940nm LED that I picked up from Radio Shack. I used a basically direct connection to one of the digital output ports on the Arduino. The only complexity of this part is  the desire to make the IR trasmitter pretty mobile; I need to be able to position the receiver and transmitter separately from each other so I don't need to put a table in front of the TV to hold the enclosure. Since the LED is external to the enclosure and positionable, I grabbed some male-female servo extension cables from Amazon. I snipped one in half and glued the male end to the enclosure, making an external-facing plug. 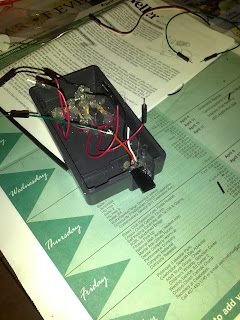 I then did away with the white wire (leaving only two channels) and soldered the black wire to the common ground used by the LEDs (the red wire gets a breadboard jumper wire and connected to digital port 13.

The LED side of the wiring is simpler. Cutting the male plug off of another servo extender and stripping out its white wire, I soldered the IR LED onto the remaining wires and added a bit of shrink tubing to clean everything up. 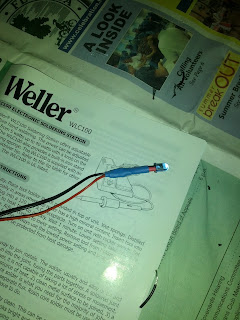 The final software package is available on Github. It's readily configurable for details, but its default configuration is as follows:

I ran a test (with the timer temporarily overridden from a half-hour to five seconds), and I'm pretty happy with the results!

Overall, this has been a pretty educational project. In the future, I'll try and add the Ethernet shield so that I can wire computer control into the entertainment system.
Posted by Mark T. Tomczak at 9:00 PM 1 comment:

Return of the Arduino part 2: status indicators are your friends

The essence of user-friendliness is feedback. I won't be rivaling Apple with my little creation, but having more than zero indication that the IR receiver is actually picking up signal is probably wise. So the next step in the project was to mount some LEDs to the case to give me a bit of status indication.

A quick trip to Radio Shack netted me three red LEDs (2.6v, 28mA, 10mcd), one green LED (2.1v, 25mA, 6.3mcd), and a quad of 220-ohm resistors (and some 1K-ohm resistors). One thing I've learned during this process is to verify everything before busting out the permanent-connection hardware; before soldering or gluing anything, I bread-boarded the LEDs and used a slight modification on the Arduino "Fading" demo to confirm that all four LEDs would light. This turned out to be wise; my initial plan had been to use a 1K-ohm resistor between all four cathodes (in parallel) and ground, but I discovered that allowed too much back-current to leak across the LEDs---not desirable at all.

Once I'd verified the configuration, it was time to get to work. Trimming the anode leads a bit on the LEDs, I soldered one resistor to each anode. I then grabbed my Dewalt and 3/16" bit again and bored four parallel holes in the upper half of the case, then glued the LEDs in place. Due to a slight mix-up on my part, the green LED ended up with its resistor on the cathode, but no harm seemed to be done. I soldered all the cathode leads (including the resistor lead from the green LED) into one, and left the anode leads to be connected to the Arduino.

I ran into a bit of a conundrum at this point: with the LEDs living on the top shell, I wanted some flexible wire with some nice, solid end plugs to connect the LEDs to the Arduino control pins, but nothing in my kit really fit the description. Fortunately, I discovered that Radio Shack sells a SideKick basic kit that includes what the kit calls "breadboard jumper wire." It turned out to be the perfect tool for the job if I cut them in half and soldered the loose wire to my LED leads.

With the jumper wires in place, I connected the LED anodes to Arduino pins 6, 9, 10, and 11, and the cathodes to one of the two GND pins. I then wrote a couple of short LED test functions:

// LED control library, by Mark T. Tomczak
// Public domain
// To use:
// * Call SetupLedControl with an array of LED inputs IDs
//   (-1 terminates the array as a sentinel value)
// * Call functions in the library to control the LEDs.

// This is a fun little function that delays a specified
// number of milliseconds, while showing the time remaining as the
// intensity of several LEDs.
//
// When all the time is remaining, the LEDs all glow at maximum brightness.
// Elapsing time is shown as the LEDs slowly going out one-by-one. void CountDown(long time_to_countdown_millis) {
unsigned long start_time = millis();
// TODO(mtomczak): Arduino millis() function rolls over to 0 after
// about fifty days. You should account for this rollover...
// possibly build a timer library with some structs to hold that state.


I combined this library with the recognition code from my Arduino IR bridge project so that it would blink twice and then count-down over five seconds when it recognized an IR pattern. Overall, I'm not unhappy with the results!

Part three will wrap things up by adding the IR emitter and the code to drive the entire project.
Posted by Mark T. Tomczak at 9:08 PM No comments:

Return of the Arduino part 1: mounting the controller and IR receiver

I've had an Arduino UNO board kicking around my house for about a year. My original plan was to create an input switcher for the TV that would run off the cable remote (it would maintain a bit of internal state and fire the commands to switch TV modes from the current one to the desired one instead of needing to fish around for the TV remote). This was pretty successful, and I published both the IR decoder and the input changer itself on GitHub. But I never got around to enclosing the project and making it "clean."

So this week, I finally purchased an enclosure and power supply for my UNO board. Trying it out, I immediately discovered that the enclosure doesn't really fit my Ethernet shield (which the reviews will tell you gladly; that's what I get for not reading the reviews before purchasing). Since I didn't need the shield, I shed it (I'll probably get another UNO to plug it into later).

Then, I got out my kit and got to work. It's been awhile since I had occasion to solder anything, and I've never done hot glue for an electronics project before. Overall, I'm not unhappy with the results. 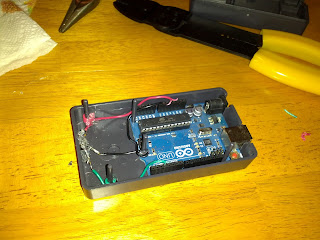 I made a hole in the enclosure using a 3/16" bit on my Dewalt drill, angling it diagonally back-and-forth to get a good wide slot (I wanted to make sure the receiver had a nice, wide field-of-view to catch IR signals). I then seated the Arduino board in the enclosure and glued the IR sensor in place with my wife's glue gun (note to self: I've stolen my wife's glue gun and owe her a new one). My gluing technique is hellishly wasteful, but I figure I'll get better with practice. One thing I love about working with glue is that it doubles as an insulator; no more wiggling my fingers in between tiny wire runs to get the electrical tape on there!

Once the glue solidified a bit, I did a quick soldering job and was all set. I wrapped the signal and power wires around the posts in the enclosure also and threw some hot glue on there for mechanical stability (I want to make sure any jostles the wires might take are being supported by the posts and not the Arduino's female pin coupler or the IR sensor's leads).

I then fished a sticker out as a finishing touch. :) 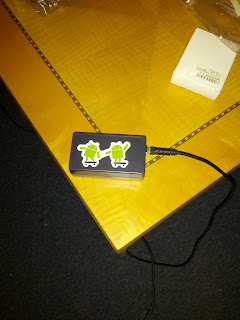 I'm very happy with both this sensor and its range. I ran some quick tests with the full enclosure at different ranges using my old remote signal decoder program, and found it was able to sense a good distance away (about 15 feet; plenty for my needs).

Part 2 will discuss extending the software and adding status indicators.
Posted by Mark T. Tomczak at 8:08 PM No comments: