There's a neat trick you can do with angled plastic to give the impression of an image floating in space. While this is technically a "Pepper's Ghost" illusion, it commonly goes online by the name "Pyramid Hologram." For our friends at Iguanatron, we put together a top-down projector implementation with a 20" computer monitor.

So here's how it went down.

The Pepper's Ghost trick involves projecting light onto a 45-degree angled, transparent surface. Since light also shines through the transparent surface, the mind composites the two images and assumes the reflected image comes from the transmission source.


How We Made Ours

After looking at a couple of videos on YouTube (and getting some advice from a team that had already done something similar for a hackathon), we were ready to start. Our approach was to build a pyramid of Lexan (1/8" thick) and suspend a screen over the pyramid; by arranging the screen just below eye level, we could hide the source of the image a bit (you can move the screen higher from the point of the pyramid, but doing so causes the reflected image to appear to be further toward the back of the reflector).

Forty-five degree slope generally gives the best effect, but it's important to remember that this slope cuts your maximum image size about in half from the size of your projector. We had originally intended to use a Nexus 7, but a 2" high image didn't read well. So we instead went with a monitor with a vertical height of 10". 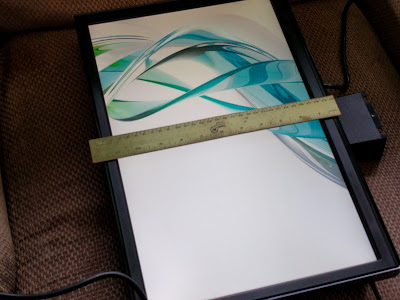 Measuring out the way the Lexan needed to be cut was a bit of trigonometry. Though the sides of the pyramid should slope at 45 degrees, the angles of each face of the pyramid aren't 45 degrees (because they need to meet in three dimensions). So we calculated the necessary measurements for the Lexan by figuring the height of one of the face triangles from the desired 45-degree face slope and the 10" base length. 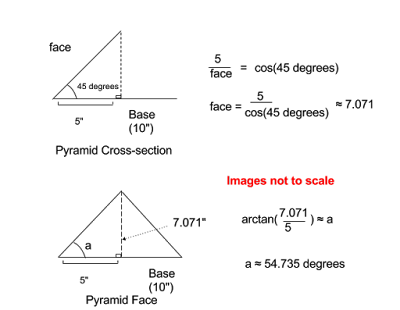 Having run the calculations, the rest was chop-saw work, with just a bit of Scotch tape to keep the pieces together. Note: chop-sawing Lexan makes a hell of a smell; you probably want to do it in a ventilated area. Note also that since you'e working with triangles, you can get creative about the arrangement of them to save material. 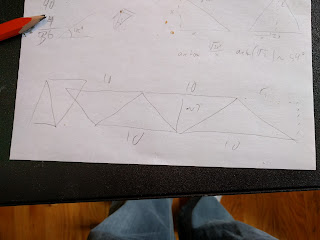 A bit of tape, and we were ready to go. 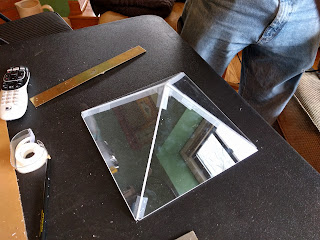 To test, we found a few videos online and ran them while holding the projector. Note that there are two orientations generally used: top-down (as we did here) and bottom-up (for creating a smaller pyramid with a sheared-off top that rests on a smartphone or tablet). For top-down, you want videos where top is oriented to the center. The end result? Not so bad!

There are a couple of ways you can composite a video to run on the projector. For this project, Brian Gray of Iguanatron put together the final video.

If you want to do it on the cheap, you can composite your video in the free program Blender using transforms. The process is:

Iguanatron, of course, without whom we would not have had an excuse to do a cool thing. :)

Aaron, who continuously pulls me into doing fun things.

Adam, who did a similar project for a hackathon and was very generous in sharing his experiences in what worked and what didn't.

Pyramid Hologram Videos, a YouTube channel that collects what it says on the tin. Useful for reference testing.
Posted by Unknown at 8:00 AM